After a night of interrupted sleep in the town park in Rosalia, due to kids goofing around, dogs barking and coyotes hauling, I was up at 6.30 and on the road again an hour later. Fortunately the skies were clouded allowing for cooler riding for longer into the day. 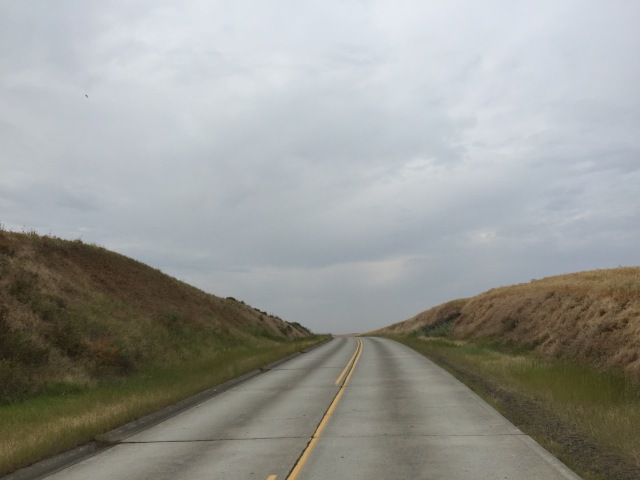 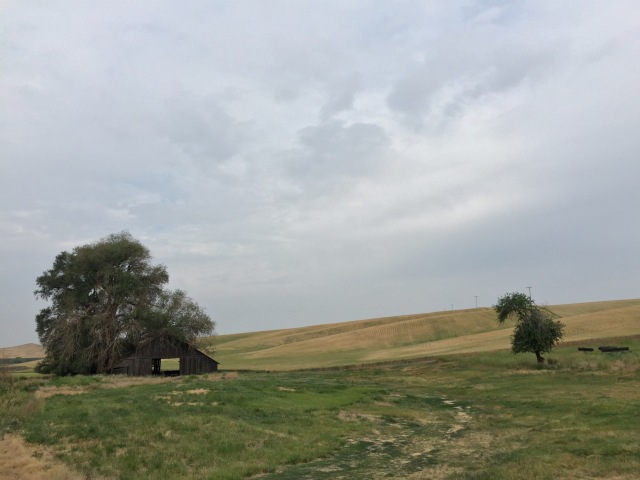 These rascals were giving me a hard time this morning. Dogs hate bicyclists, that is well known, but usually they are easily scared away or simply know their boundaries. These mutts did not settle without a standoff. I had them muffled up by throwing pieces of a choclate chip cookie at them, but that was as shortlived as a Middle Eastern seizefire. Right when the last cookie crumble was had, they were at it again. The owner stood by the house up the street and did little to nothing to call them home. I am usually a humble fellow, with little intent in harming any being, on any number of legs, with or without fur. This time though I actually pulled out my tentpoles and was getting ready to give them a whip they would not forget. Fortunately for all involved I was able to scare them off by one big verbal attack. I got the feeling that the old saying of the owners and their dogs are alike were true in this case. Darn mutts and hopeless owners for not raising them properly. 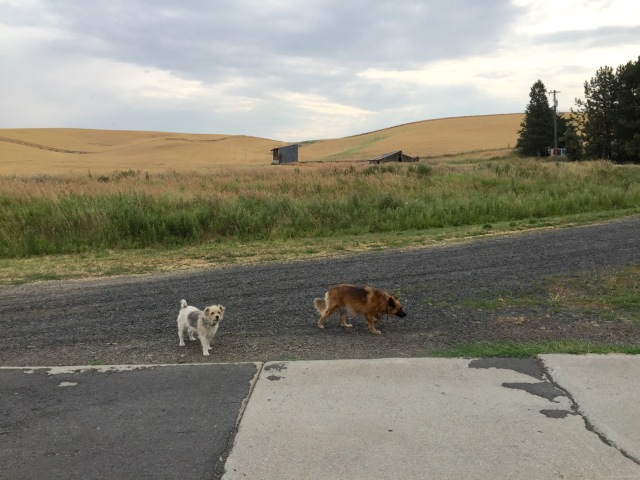 Further up the road I came across this crash site. I did not come to think about my medical emergency training in this incidence, as I think the driver is dead, of old age now, did he come to survive the blow. The tree had big marks from the impact. A peculiar sight for sure and makes you wonder about the circumstances. 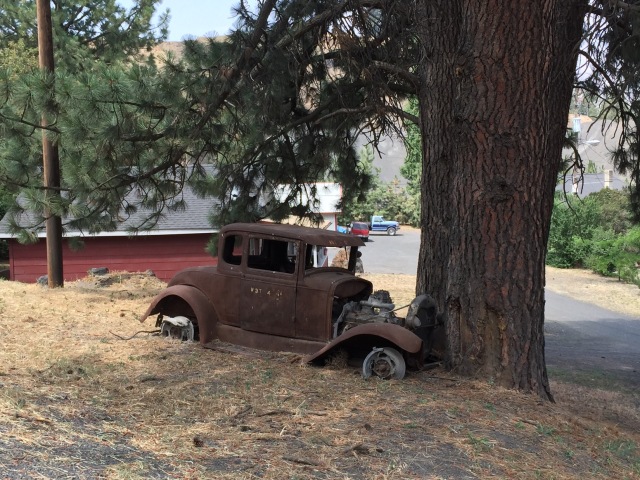 The landscape changes all the time. Gone today were the rather grumpy hills and rather were the hills today of a more mellow and sweeping nature. They were all mostly covered with wheatfields, and in this area they were well into harvest. The giant harvesters were chewing off the crop at amazing width and speed. 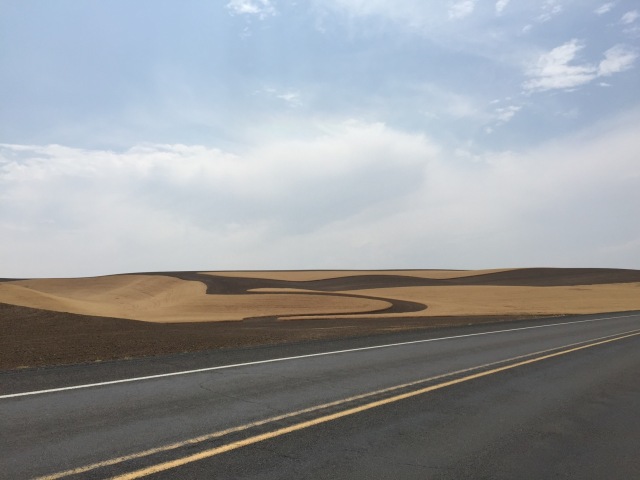 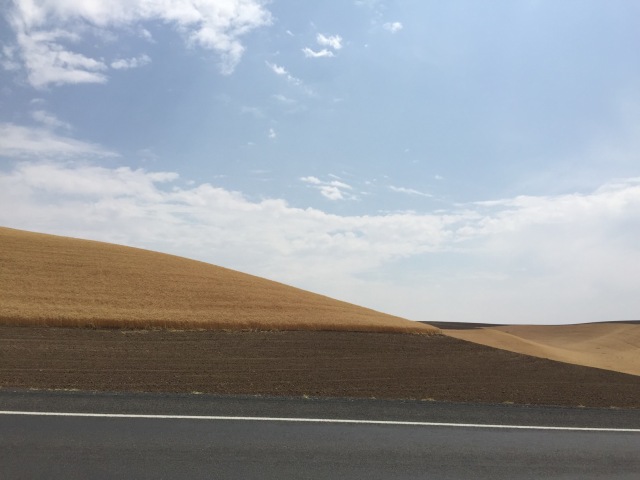 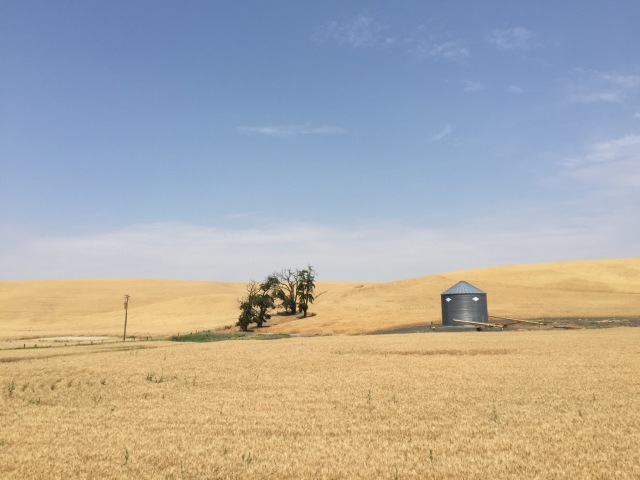 Here and there I also meet with some horse and cattle. It is funny how aware they are of their surroundings. They don’t seem to mind the cars so much, but they seem to know you coming down as a bicyclist almost before you see them yourself, often from quite a far. If one individual notices, the other are quickly brought to attention as well, even though there is no alarming sound given by the first one. It is almost as they share some common awareness. 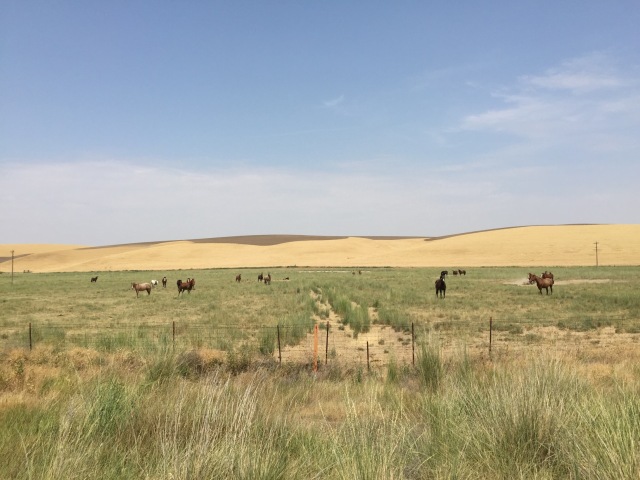 I stopped by the fence for a while and they all came towards me. Some braver than others, leading the way for those not so brave. It is interesting to observe such group behaviour. Nevertheless, they are all very beautiful and especially so in surroundings like this. 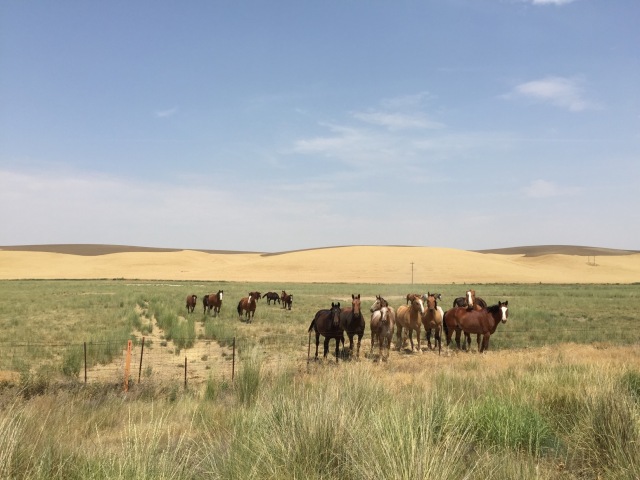 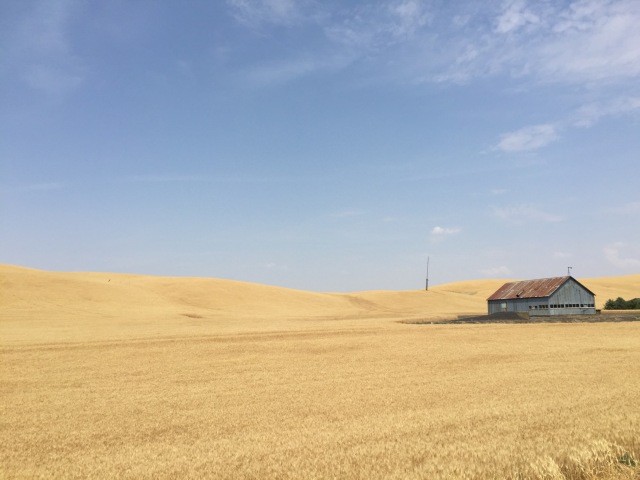 Wheat, wheat and more wheat. Other crops they grow here are barley, sweetpeas and lentils.  I inspected a straw and found, much to my anticipation, that the grains are small and light, compared to what they should be. Good grain is way more plump than this. I farmer I talked to at the general store in the nearest town confirmed this and said that they did not have their normal “billiondollar rain” this year. This land is dry and don’t get much rain, apart from some really big and soaking rainfall in late spring, just after seeding. This year the tilling of the land started two weeks earlier than normal, and the much needed rain did not come. This has led to a small crop, harvested way earlier than normal. 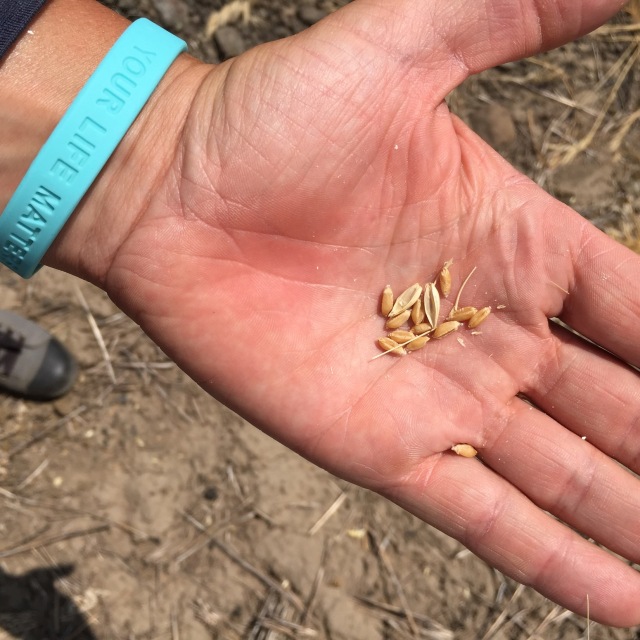 Regardless of the yield, the fields are absolutely beautiful and they smell wonderfully. The smell almost makes you salivate over the thought of fresh bread.

It does not show well in the photos how hilly the fields really are. I am astonished as to how easily and perfectly they are able to work the lands. They have harvester that level up in the hills, and I see farm tool specially designed to operate in such terrain.  Here is a photo I pulled from the internet, that shows the lands in late spring. It is like an ocean of green. Quite pretty in my eyes! 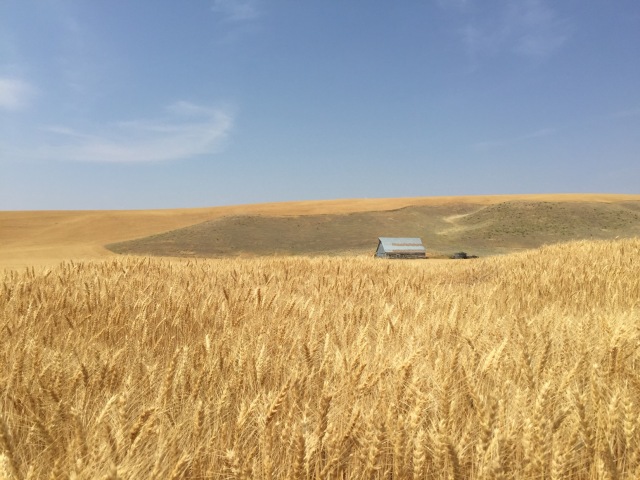 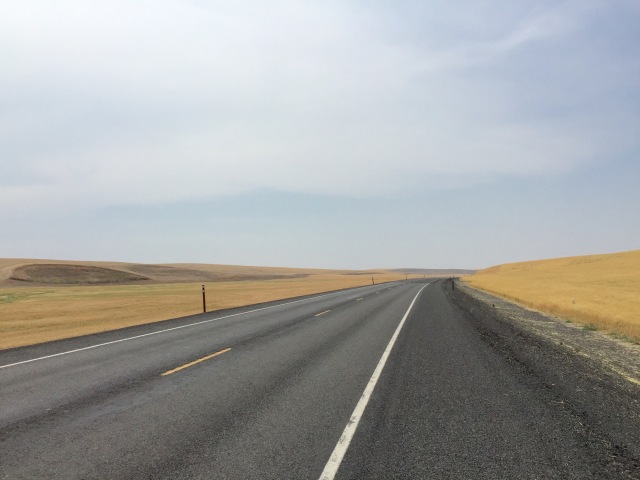 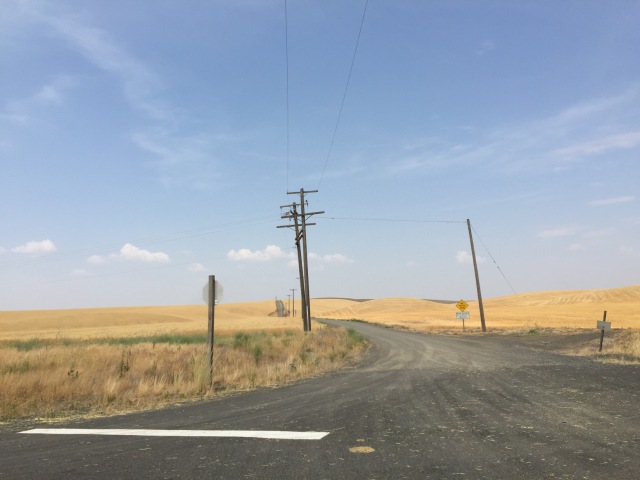 Towards the end of my day of riding the landscape turned more rocky and even drier. My home for the night is the town of Washtucan. This town sits at the foot of the last hill, before the great open flatland, that reaches all over to the Cascades to the west. Some have referres to it as a desert, with harsh winds. I will know by the end of tomorrow and I will tell you about it, if you don’t already know. Luckily the temperatures are said to drop in the 80s, but I don’t believe it until I feel it on my own skin. 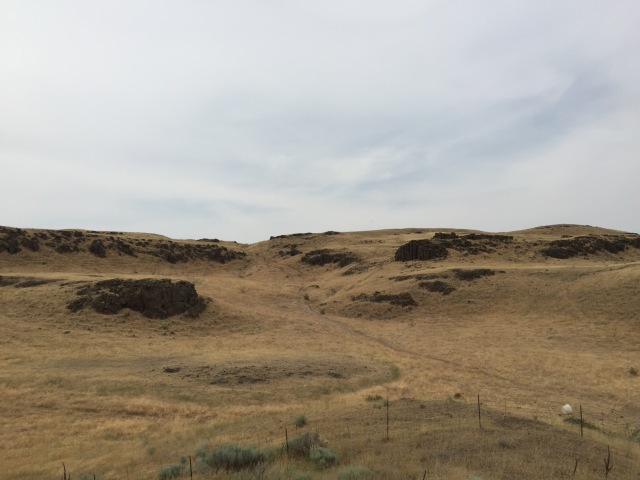 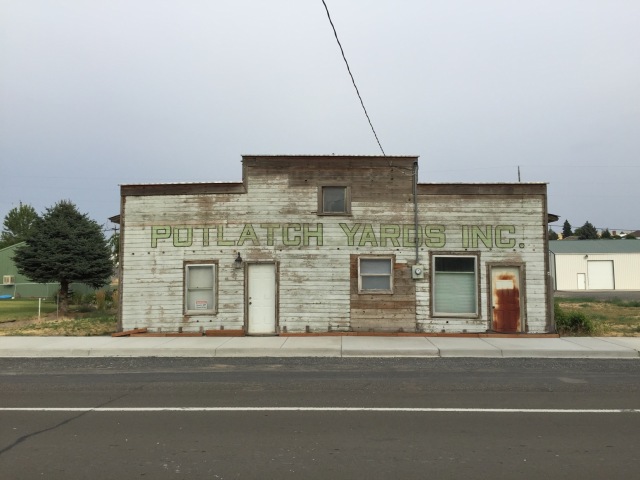 Some of the abandoned commerical buildings on the Washtucan Main street. There are many such building that tells stories of a different time.

Happiness today was found under the canopy of a big maple tree in Bassett park, free of charge, courtesy of the Washtucans. There is even a public swimming pool here. It seems like every little town, regardless of how poor they comes down as, they offer a place for kids in all ages a place to swim. Back in Norway, often referred to as the wealthiest nation in the world, many pools do not have the funds to operate. Go figure! 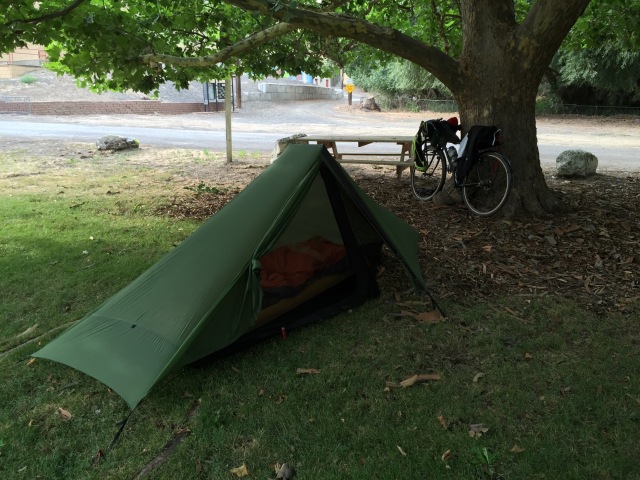